Remembering the good bits: with caricatures. 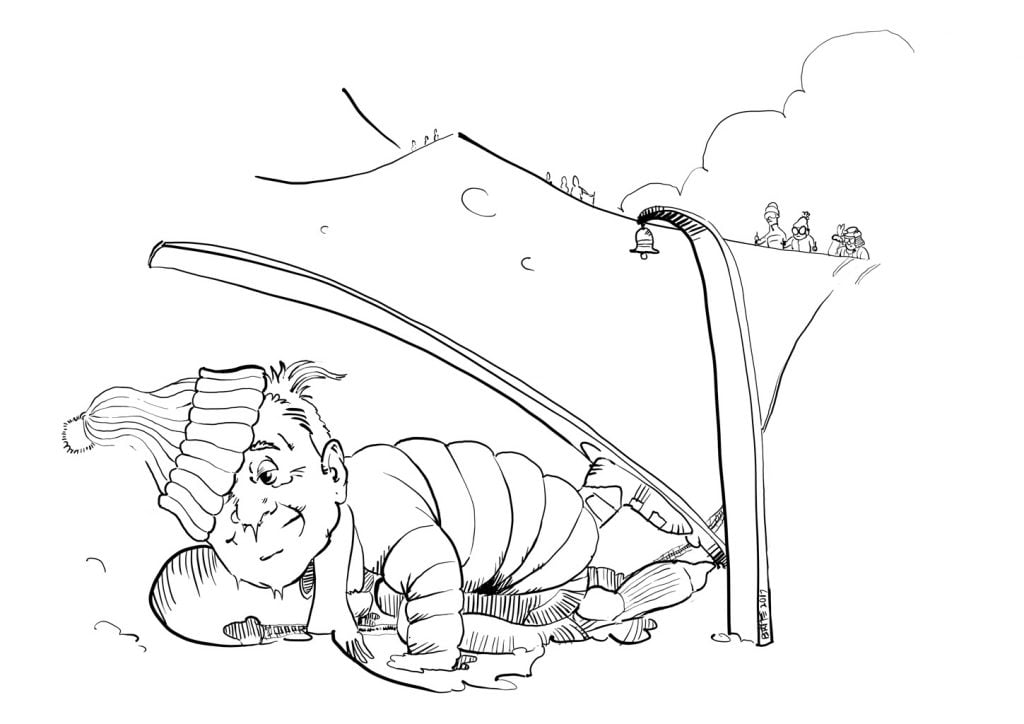 I wish this one came out as a book!
A few months back I was invited to hear some anecdotes from one of Christchurch’s retired businessmen.
His eightieth birthday was nigh and he requested some entertaining “snaps” to accompany his reminiscences at the party. I got just enough information to make the drawings but was tantalised by the wider picture!

Imagine this as a biography… What do you get if you cross a wadi with a motorbike?

There was the time our client was in Libya with the British army… hurtling downhill on a motorcycle when he suddenly found himself in a wadi. The back end of a motorcycle tends to keep going when the front drops out of sight, and he found himself (briefly) free of the restraints of gravity. The handlebars of the aforementioned powered bicycle now resembled a clove hitch.

On this job Google makes research so much easier! 15 years ago I would have to plunder the library for pictures of wadis… What IS a wadi? In brief it’s a dry river bed, a gully in the desert complete with terraced walls. The next question to Google was about the motor-sickles used by the army in Libya. What WERE they?
Great big chunky Nortons, they were.
One search result was of a sunken World War Two transport still down there with dozens of coral encrusted Nortons piled like pickup sticks. Such fun!

Following this I heard how our kiwi gentleman became the forestry consultant to the United Nations. I knew of course that Forestry men wore boots. There was one other thing I knew about forestry: Radiata.
Perhaps he would present the folks there with their very own pine tree in a PB5. (those little black polythene planter bags you plant plants in, yeh? The number denotes the size. I grew up in a nursery with all the other flora, I remember those.) The tips and tricks of caning.

Jumping back to his schooldays in the UK I heard how this gentleman tested the  legend which states that placing a hair across one’s palm will absorb the sting of the master’s cane, leaving you chortling like a lad from the Beano. What made ME chortle was imagining this spruced gent in a school cap, lank socks and shirt tails.

The hair didn’t work, by the way. Our “Mister X” is also a keen sailor.
For whatever reason, one sometimes finds oneself throwing the helm hard a’starboard.
This is not a good time for your best pal to be winding up in the head.
Surfacing- he was quite flushed, seemed his mug nearly ended in the head.

Why the sudden about turn I wondered?
Photos of “Mrs X” show a well turned lady with a penchant for headgear of substance.
Perhaps a distracted gal could bowl the captain with a brandished brim? The tale returns to the Libyan soujourn. Yep, the nurse somehow didn’t pick it. thrusting his hand out for a handshake revealed the answer to  her query. Soon after I heard of Daisy Mae: the car of the courting couple which on her own produced a plenitude of prankish party tales.

They don’t make ’em like that now, I believe. While a good lifetime has enough for a dozen novels, a ten minute talk was tops on this project, so we had to end on skiing: the sport which makes a fool of every man (unless he grew up Swiss, but then he would have yodelling and lederhosen to equal the task.) Face-plants happen in snow as much as snow angels and skis thrust into the earth like hardwood cuttings, but all three combined… WITH a nasal furrow the length of a hillside?

A generation or two on, the world “as it was” is an untapped adventure. Even a mundane life had elements unimaginable to the adventurer of today.

I wish this lot was in a biographical tome, there was a lot of good stuff yet to be recorded.
In twenty years these first-hand experiences will be archived without a key: It’ll be too late to wait for the film to come out.