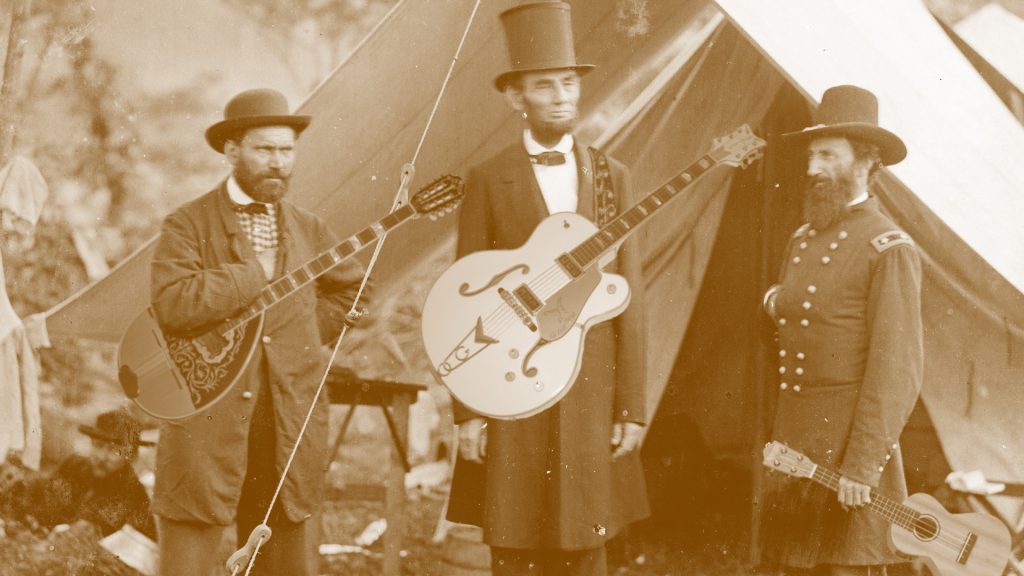 A key part of Abraham Lincoln’s anti-war campaign was his travelling band “Abe and the Slaves of Reason.” They played widely to camps of Union soldiers, accompanying many of Lincoln’s more well remembered public addresses.

The popular president played a Gretsch Falcon, seen here in Maryland next to the founder of Pinkerton’s Detective agency (a strong hand on bouzouki, though no recordings are extant). Pinkerton (left) was head of Lincoln’s security throughout. The fact he’s sharing a tune here with the president reveals manly relationships with one’s colleagues were truer and deeper in days gone by.
Both Pinkerton and his brother William headed what we’d consider a Secret Service of the era. William was quite reasonable on the harmonica for his time.

It was the Major General
who first suggested a smaller,
more portable Banjo.
It became known as
the “Banjolele”

Major General McLernand (right) is seen here with a custom made Ukulele, though the Banjo was more his usual fare. It was the Major General who first suggested a smaller, more portable Banjo. It became known as the “Banjolele” and was to become its most popular after his death in 1900. It was a symbol of the Roaring Twenties if anything was!

Haha! …and if you believe that you’ll believe anything. I remember when a photograph was as honest as Abe and the published word was our final authority.
Now we live in the age of Photoshop where any uncanny appearance is more likely the result of Absurdist Photography, a convincing photomontage.

This pic is for singer CHAS WILLIAMS for whom I’ve completed two animated music videos, the second of which was recently released. The second vid will be discussed here in a future entry but can be seen in the meantime:

“Abe and the Slaves of Reason” is a fictional former band created for Chas’s Website with the intention of promoting the rest of his songs.
If you put a hat and beard on Chas he could be Allan Pinkerton in the photo…

However, one must be careful what one puts into type. Chas had to remove his last typist.

← Now Acceptin-Medical housecalls for your Hammond